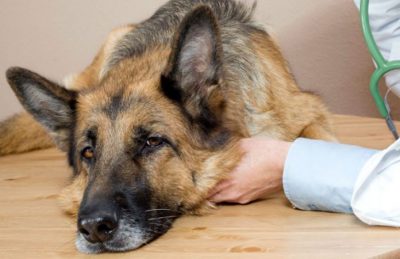 Heartworms in dogs (Latin name Dirofilaria immitis) are parasitic worms that are common in both dogs and cats. Like their name suggests, they live in the dog’s heart, normally free-floating in the right ventricle and nearby blood vessels. Heartworms in dogs are transmitted from dog to dog by mosquitoes which pass the worm larvae through their saliva. The presence of heartworms can be very dangerous to the dog’s health. Although the dog will not display signs of infection until it has progressed considerably, heartworms can be life threatening and are sometimes difficult to detect and diagnose.

What to do about it, When a dog is first infected with heartworms, there are literally no signs and the presence of heartworms in dogs can not be detected even with a blood test. Once the worm larva reaches the heart and matures, however, signs that are detectible by X-ray start to develop almost immediately. These include damage to the blood vessels around the heart and lungs. It is rare that a dog will be infected by only one worm and as the mature worms in the heart grow in size and number, the conditions worsen, eventually causing a blockage of blood flow. It is at this point that the dog will start to display physical signs which can include pain, hypertension, difficulty breathing, lethargy or even fainting. In extremely progressed cases the dog can suffer from heart failure and death although by the time the heartworm disease has reached this stage the owner has probably realized that something is going on and sought veterinary care.

Once a dog has been diagnosed as having heartworms, treatment must be started. What this treatment is and how it is administered is dependant on the stage of heartworm infection. Generally, there are four stages of heartworm disease.

Stage One – Dogs at the lowest risk – heartworms are detected in X-rays but all other tests appear normal.

Stage Two – Dogs are moderately infected, may have some difficulty breathing and be demonstrating coughing

Stage Four – Dogs have Vena Cava Syndrome and are in shock, essentially dying – surgery may be undertaken to remove worms, but there is no guarantee that it will save the dog.

The Female Dog In Heat Cycle

Heat stroke in dogs is a common condition that can be easily prevented by making sure your dog always has plenty of water and fresh shade. The most common cause is carelessness by an owner, such as...

Continue Reading
link to The Female Dog In Heat Cycle

Female dog in heat is a huge responsibility to bear. Your dog's body is going to go through a variety of changes when in heat. In order to keep your dog healthy, safe, and happy, there are a few...


We at dogcarementor.com want to provide a growing dog lover's community by sharing the secrets to make your dogs more safe, comfortable and healthy. We engage with our readers by spilling secrets about dog safety, care, and wellness. Also help dogs and their owners get out and enjoy an active lifestyle together

We really love our dogs and do enjoy performing activities with them. Knowing this does help establish the mode for how we stay positive when things get difficult. We write on interesting and a variety of helpful topics on dogs.

This site is a participant in the Amazon Services LLC Associates Program, an affiliate advertising program designed to provide a means for sites to earn advertising fees by advertising and linking to Amazon.com. We are compensated for referring traffic and business to Amazon and other companies linked to on this site.